How to Shutdown Windows

With tiles and tablet kind of interface, new versions of Windows need command line shutdown more than their previous versions. This post explains how a Windows user can run shutdown from CMD. Additionally, if you have issued a shutdown command and then realize that you don’t need it, you have a cancel option too. Moreover, this cancellation works even for GUI triggered shutdowns. That’s definitely awesome right! Let’s get into what this command is and how to use it.

Below are the steps to be executed to shutdown your Windows PC.

Now if you’ve changed your mind and no longer want to go ahead with shutdown, the same ‘shutdown’ command would be handy for you to issue a cancellation.

After running this command  you would see a message like “Logoff is cancelled. The scheduled shutdown has been cancelled.”
You can abort the shutdown at any point during the countdown(default is 60 seconds. You can specify custom timeout using /t). Note that cancelling can be done only from command prompt, this is not supported in GUI. Also, we can cancel shutdowns issued from GUI too.

Using /t option, we can even schedule the shutdown at desired time. Do you want to shutdown 1 hour later? You can do this. Just run the below command

Example – Below you can see the command executed to shutdown 1 hour later and Windows displays message at the right bottom corner confirming the time of the shutdown to be 1 hour exactly from current time. 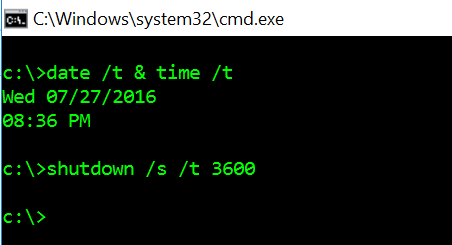